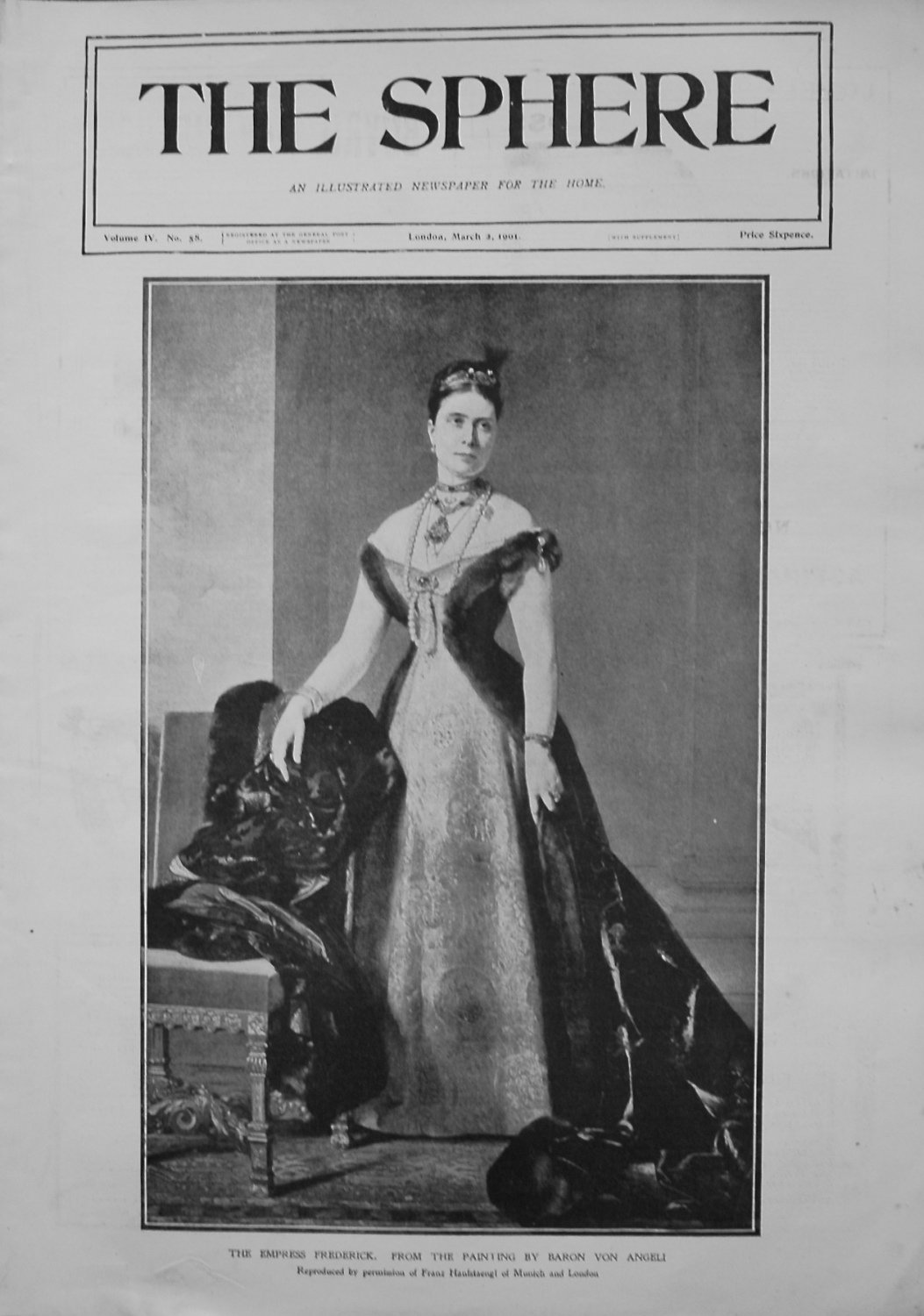 1- Front Page shows a Picture of "The Empress Frederick. From the Painting by Baron Von Angeli."

3- Full Page Illustration drawn by Sidney Paget called "The Kaiser and the Little English Boy : A Reminiscence of Cowes." (Descriptive Text Underneath).

6- Full Page showing 4 Sketches of "The Empress Frederick as Sketched by her Mother the Late Queen Victoria."

8- Article on "The Pursuit of De Wet and his Commandoes." Showing a Portrait of the Redoubtable De Wet.

9- Article with Photographs on "The Royal Observatory in Celestial Pekin : Looted by the Allies."

11- Full Page showing "A Picture now on view at the Society of Oil Painters : Painted by S. Melton Fisher, the Vice-President."

12- Article called "From Bristol to the West Indies : The New Line of Mail Steamers from Avonmouth to Jamaica."

13- Full page showing 3 Photographs of "Our Beloved Queen Alexandra and her Grandchildren."

14- Double Page showing the following 4 Photographs of "A Nation for a Continent, a Continent for a Nation" - The Birth of the Australian Commonwealth at Sydney.
a- The Citizens' Commonwealth Arch in Park Street, Sydney.
b- The indian Troops Passing under the Wool Arch.
c- The Military Arch at the corner of Oxford Street, Sydney.
d- A Panoramic View of the Swearing-in Ceremony in the Centennial Park, Sydney, on the Occasion of the Birth of the Australian Commonwealth, January 1st 1901." (Descriptive Text at bottom of Page).

15- The Weekly Article "Amusements." Showwing the following 3 Photographs.
a- Miss Marie George, in "The Belle of Bohemia."
b- Cinderella at the Hippodrome.
c- Miss Florence Collingbourn as San Toy, at Daly's Theatre.

21- Half Page Advert for "Mappin Brothers."

26- Full page Advert for "The Library of Famous Literature," by "The Standard."

27- Double Page Illustration drawn by Ernest Prater, called "The National Game of the Season : A Scrummage in a Rugby Match." (Descriptive Text Underneath).

Condition is Good. with a Few Pages Lightly Tanned.