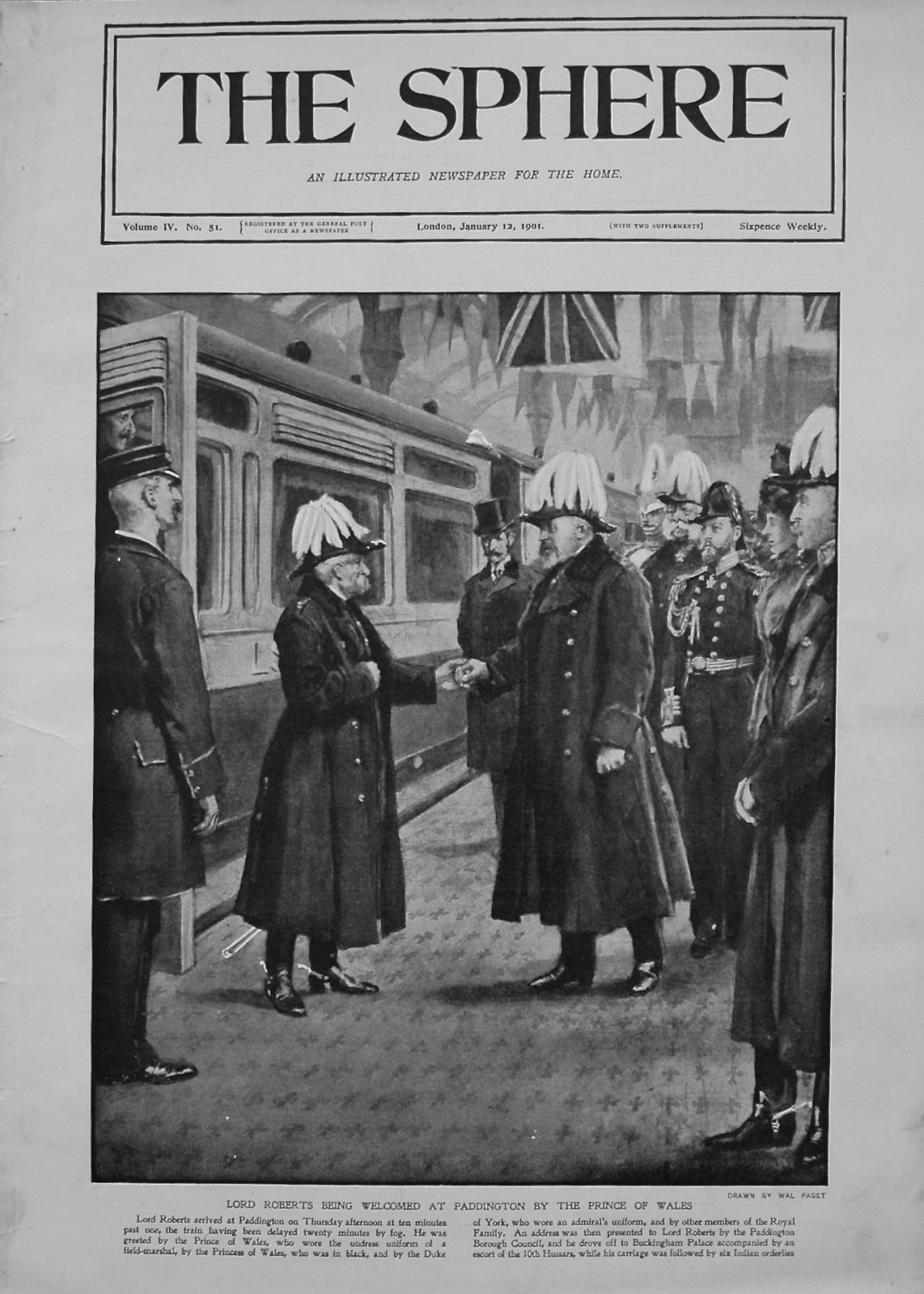 For Sale is an Issue of "The Sphere," January 12th 1901, Volume IV. No. 51. This Issue contains 16 Pages, 32 Sides, and has been taken from a Bound Volume, therefore the Binding holes are showing.

Contents.
1- Front page shows a Drawing by Wal Paget of "Lord Roberts being Welcomed at Paddington by the Prince of Wales." (Descriptive Text at bottom of Page).

3- Full Page showing the following 2 Half Page Drawings by R. M. Paxton for "The Return of Lord Roberts : His Reception at Cowes."
a- Lord Roberts replying to the Address of Welcome.
b- Princess Henry of Battenberg, as Governor of the Isle of Wight, Receiving Lord Roberts on the "Alberta."

4- Article called "The Veteran Artist of "Punch" and his Successor." By Arthur W. Beckett. (Together with the following Portraits.)
a- Portrait of Sir John Tenniel. (Retiring).
b- Portrait Mr. Linley Sambourne. (Successor).

5- Full Page showing a Drawing by R.M. Paxton, called "The Return of Lord Roberts : His Arrival at Southampton." Also on this Page is a picture of the "Casket Containing the Address."

8- Full Page Drawing by Charles Wyllie showing "The Return of Lord Roberts : His Lordship on the "Alberta" at Cowes."

10- Full page showing the following 2 Photographs for " The Return of Lord Roberts : His Brief Visit to Gibraltar."
a- Lord Roberts starting to inspect the Forts.
b- Lord Roberts being presented with an Address in Commercial Square.
(Descriptive Text beneath each Photo.)

17- Full page called "A Menagerie in Model : Natural History Tableaux at the Crystal Palace. (Showing the following 2 Tableaux.)
a- Scene in the Canadian Mountains. Red Deer, Canadian Deer, and Fallow Deer.
b- The Polar Bear.

18- The Weekly Article "A Literary Letter."

19- Short Story called "The Shadow of Fate," written by Adeline Sergeant, and Illustrated by Arthur Garratt.

23- The Weekly Article called "The Outlook on Foreign Affairs. By A. R. Ropes.

25- Double Page Print drawn by Ernest Prater called "The Meeting of Two Great Generals - Lord Roberts passing the Statue of his famous countryma, the Duke of Wellington." (No binding holes in this Print).

26- Drawing by A. Pearse showing Lord Roberts at "The Lunch at Buckingham Palace." (Together with details of who was at the Lunch, and what the Lunch was like.)

27- Full Page called "The Growth of Hooliganism : And the Housing of London's Poor." (Showing Photographs from the following places, with descriptive Text)
a- Bethnal Green.
b- Lambeth.
c- Hoxton.
d- Clerkenwell.
e- Islington.


Condition is Good, with the Spine being strengthened with Filmoplast tape.