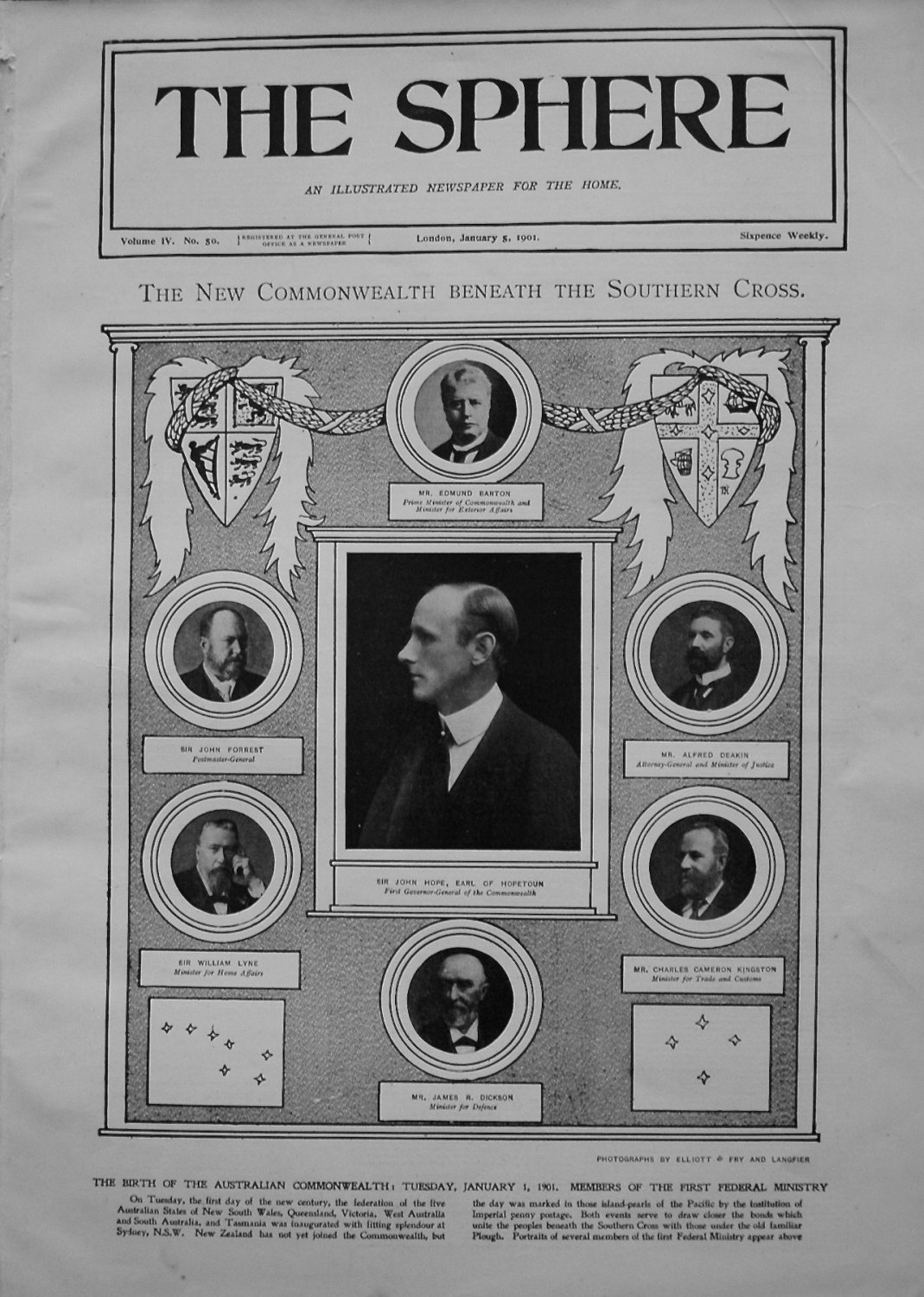 For Sale is an Isssue of "The Sphere," January 5th 1901, Volume IV. No. 50. This issue contains 17 Pages, 34 Sides, it has been taken from a Bound Volume, so therefore has the Binding holes showing.

1- Front Page is called "The New Commonwealth beneath the Southern Cross," and shows "The Birth of the Australian Commonwealth : Tuesday, January 1st, 1901. - Members of the First Federal Ministry." (Descriptive Text at bottom of Page).

3- Article Called "One of the Century's Greatest Engineers : The Late Lord Armstrong." Together with the following Photographs.
a- The Latest Portrait of Lord Armstrong.
b- Lord Armstrong's Northumberland Seat, Cragside, where he died.

4- Full page Article called "The Great Gales : How they came."

5- Full Page of 5 Photographs of "The Great Gales - The Damage They Did."
a- The Flooding of Sandgate : The Sea Breaking the Windows of the Coastguard Station.
b- The Remains of the shattered "Capricorno" at Bude.
c- The Smashed Breakwater at Watchet.
d- The Wreck of the "Capricorno" at Bude. Photographed during the Attempt to Rescue the 14 Men on her at the time.

6- Full Page drawing by Sidney Paget called "The Season's Festivities in the Queen's Kitchen : Roasting the Baron of Beef at Windsor." (Descriptive Text at bottom of Page).

8- Full Page showing a Drawing by G. Grenville Manton called "The Volunteers at the Front in Africa : An Earl in his Shirt Sleeves." (Descriptive Text at bottom of Page).

9- Full page Illustration drawn by W. B. Wollen, called "The Queen's Sacrifice to the Boer War : The Late Prince Christian Victor borne to the Grave in Pretoria."
(Descriptive Text at bottom of Page).

10- Full Page Article with the following Photographs called "Lord Roberts's Return from the War."
a- Lord Roberts in Mufti.
b- Lord Roberts as a Field-Marshall.
c- A Boer Long Tom which Lord Roberts has brought home with him on the "Canada".
d- "Belgravia," the handsome house at Johannesburg where Lord Roberts stayed on his way South.

12- Full Page Illustration drawn by Mr. W. B. Wollen called "The Great March to Pretoria - Lord Roberts and his staff on the Veldt."

14- Full Page showing a Photograph of "Lord Roberts in Working Attire, on his Stoep." (Descriptive Text at bottom of Page).

15- Double Page Print showing " The Home-coming of Lord Roberts - A Pictorial Summery of his Victorious Campaign in South Africa."

20- The Weekly Article "A Literary Letter."

21- Short Story called "The Captain of the "Campanula." Written by S. Baring-Gould, Illustrated by Wal Paget.

23- The Weekly Article "The Outlook of Foreign Affairs." Written by A.R. Ropes.

26- Half Page Advert for "Mappin Brothers."


Condition is Good, with Spine strengthened with Filmoplast Tape. No Foxing.