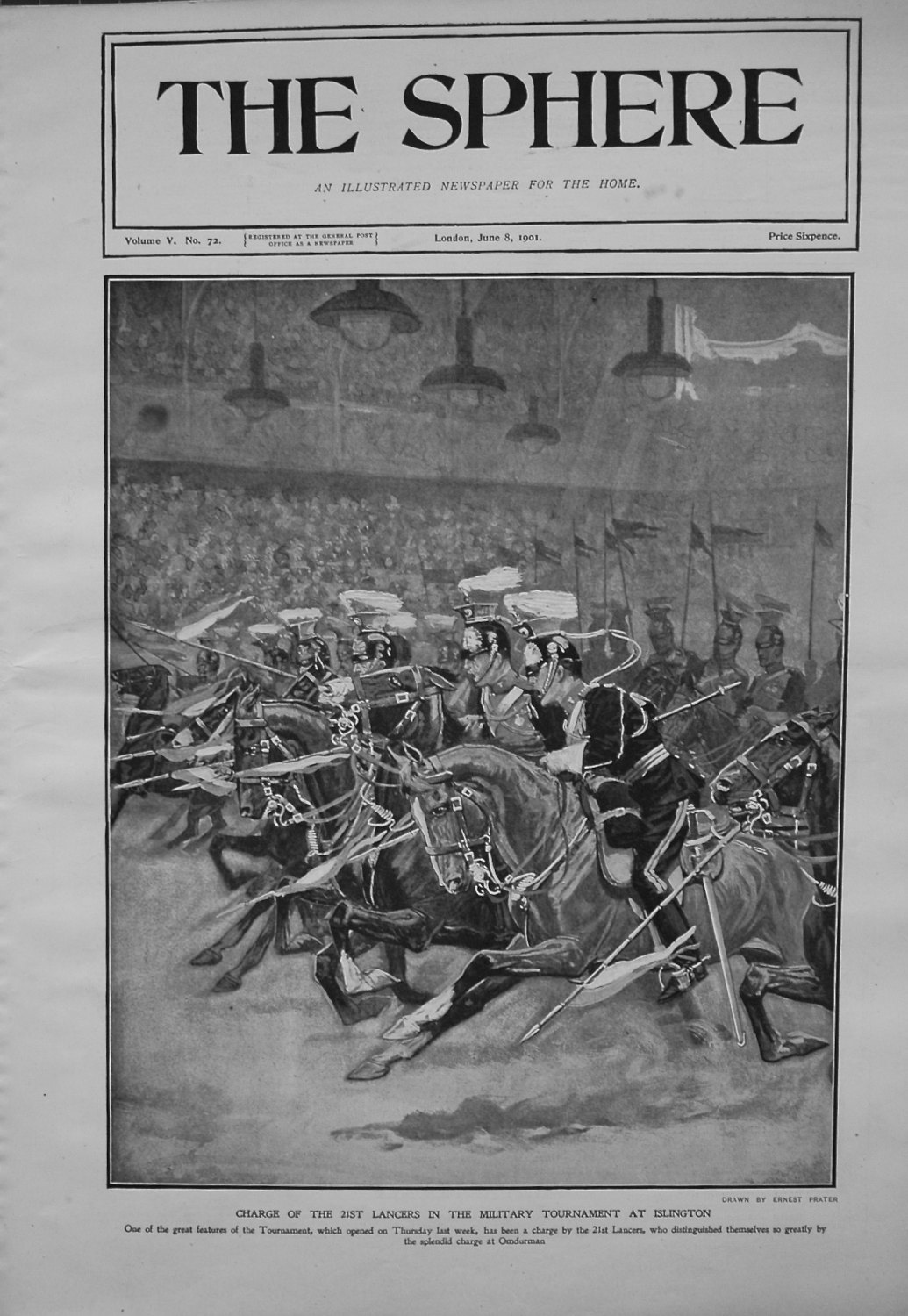 Contents.
1- Front Page shows an Illustration drawn by Ernest Prater, showing the "Charge of the 21st Lancers in the Military Tournament at Islington."

4- Full Page showing the following 2 Half Page pictures.
a- Drawing by G. Grenville Manton, showing "General French on His well-earned Holiday."
b- Half Page showing 6 Phtoographs of "The Sale of the King's Horses at Wolferton Stud."

5- Full Page drawing by J. Finnemore, of "The Melancholy Mine Disaster in Wales.
(Descriptive Text at bottom of Page).

7- Full page showing an Article written by S. L. Bensusan, called "The Crisis in Spain. a Letter from Madrid." Also showing the following Portrait Photographs.
a- The Minister of the Interior : Senor Moret.
b- The Minister for Foreign Affairs : The Duke of Almodover del Rio.
c- The Minister for War : General Weyler of Cuban Fame.
d- The Prime Minister : Senor Sagasta.
e- The Young King of Spain : Alphonso XIII.

8- Article called "The Position of Hostilities in South Africa."

10- Full Page Article with the following Photographs called "The Maori Question in New Zealand : As a Subject of Interest for the Duke of Cornwall."
a- A Scene at Ohinemutu.
b- Cooking the Dinner over a Fumarole at Ohinemutu.
c- Washing Clothes in a Tepid lake at Ohinemutu.

15- Full Page showing the following 2 Half Page Photographs of "Pictures Exhibited at the Royal Academy."
a- "Constance Cast Adrift." Painted by Fred Stead.
b- "The Echo of a Voice." Painted by Sigismund Goetze.

17- Full Page showing the following 4 pictures from "A Remarkable Exhibition at the Dowdeswell Galleries." showing "Heer Nico Jungmann's Frescoes and Water Colours."
a- "The Angelus"
b- "A Little Gondolier"
c- " Devotion"
d- "The Little Carpenter"

18- Chapter IX of a Story called "Clementina." Written by A. E. W. Mason, and Illustrated by Bernard Partridge.

19- Full Page Picture of "A Famous Painting by Randolph Caldecott, called "The Girl i Left Behind Me."
(Descriptive Text at bottom of Page).

21- Full Page showing an Article called,"L'Aiglon" in London." The Play being brought to London by Sarah Bernhardt.

22- Full Page showing the following 2 Half Page drawings from "Sarah Bernhardt at Her Majesty's Theatre."
a- The Young Napoleon on the Battlefield of Wagram.
b- The Death of the Young Napoleon in the Presence of His Mother and Metternich.

24- Half Page Advert for "Mappin Brothers."

28- The Weekly Article called "Outlook on Foreign Affairs," written by A. R. Ropes.

Condition is Good, with just one Foxing Spot on Front Page.