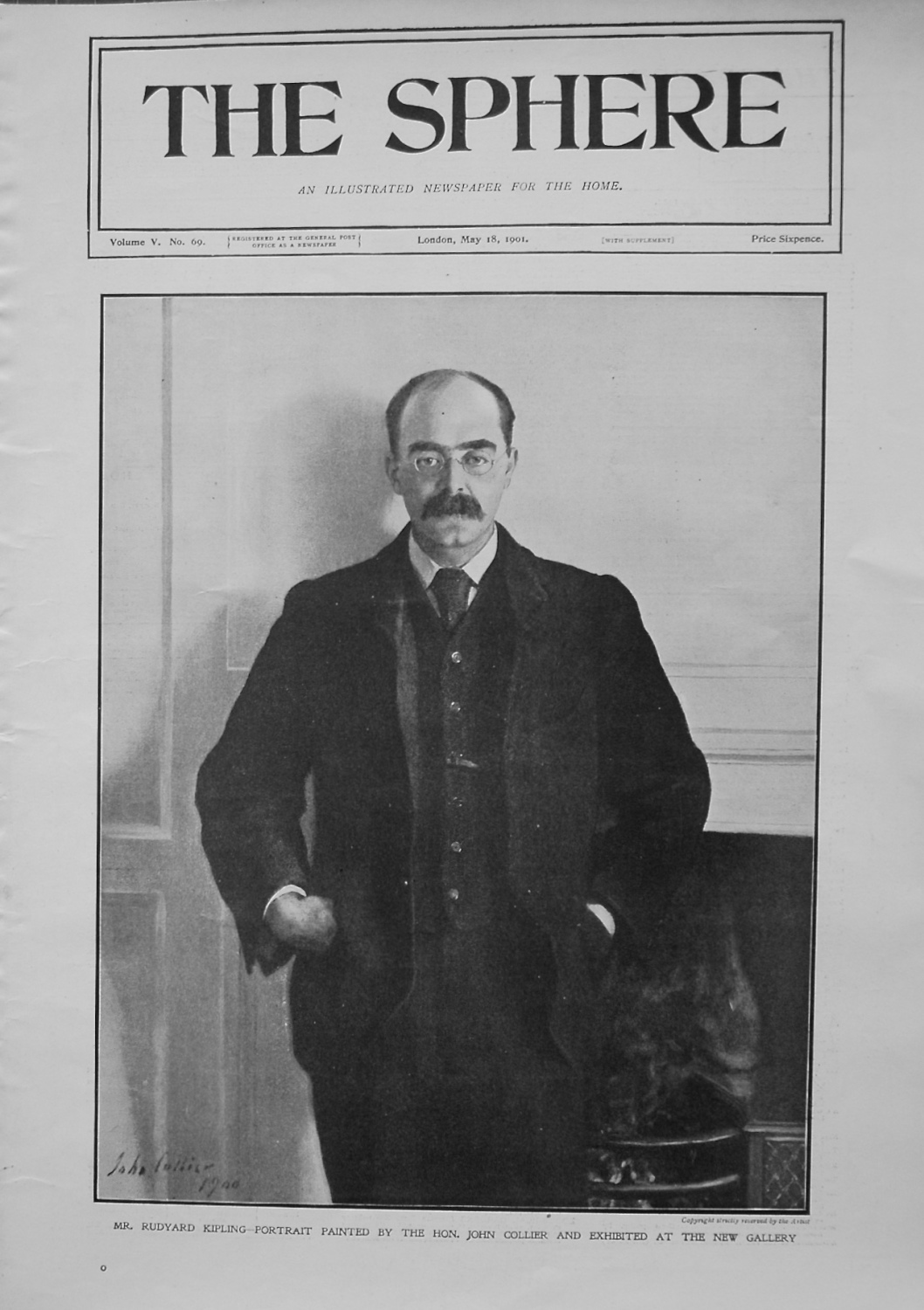 1- Front Page shows a Print of "Mr. Rudyard Kipling - Portrait Painted by the Hon. John Collier and Exhibited at the New Gallery."

2- The Weekly Article "The Newsletter," showing London Week by Week. Showing the following Photographs.
a- The unfortunately "Tantallon Castle"
b- The new Marine Palace and Pier at Brighton.
c- Mr. Hilton, the Amateur Golf Champion, making a start.
d- The Inspector-General of Irish Constabulary. Colonel Neville Francis Fitzgerald Chamberlain.
e- A Collie wounded in the China War.
f- The Winner of the Chester Cup "David Garrick."
g- The Finsbury Mace.

5- Full Page drawing by Ernest Prater called "Ceylon's Welcome to the Duke of Cornwall," showing "The Royal Party at an Elephant Bath."
(Descriptive Text at bottom of Page).

7- Full Page Drawing by Ernest Prater called "Returning from the War," showing "How our Soldiers amuse themselves on Board Ship."
(Descriptive Text at bottom of Page).

8- Full Page Landscape Drawing by Lancelot Speed called "The Drawing-Room Game of the Moment," showing "The Game of Ping Pong."
(Descriptive Text at bottom of Page).

11- Full page showing the following 2 Half Page Photographs of "How Pekin Keeps in Touch with the World."
(Descriptive Text at bottom of Page).
a- The Service at Pekin in Memory of Queen Victoria.
b- The Men who keep us in Touch with affairs in China. (Journalists).

12- Full Page showing the following 2 Half Page Pictures of "Pictures at the New Gallery Exhibition."
a- "Life and Thought." Painted by Evelyn De Morgan.
b- The Casket Scene from "The Merchant of Venice." Painted by Sir James D. Linton.

14- Full page showing the following 2 Half Page Pictures called "In the Cause of Humanity," showing Jan Ten-Kate's Pictures at the Dore Gallery.
a- The Guard May Die but Never Surrender.
b- "War against War" - An Allegory.

15- Full page showing the following Photographs from "The Royal Visit to Ceylon,"
a- The Devil Dancers who amused the Duke at Colombo Station.
b- One of the Triumphal Arches at Kandy.
c- The Singalese Community's Arch at Kandy.
d- Commemorative Tree Planted by King Edward in 1875.
e- The Departure of the Duke from Kandy Station.
f- Commemorative tree Planted by the Duke of Cornwall in 1901.

16- Double Page Print Drawn by Sidney Paget called "The Duke and Duchess of Cornwall in Colombo," showing "The Day of their Arrival en route for Kandy."
(Descriptive Text at bottom of Page).

19- The Weekly Article "A Literary Letter."

21- Full Page called "The Graves of our Heroes - Decorated by the Loyal Women's Guild of South Africa." Showing the following 2 Photographs with Descriptive Text.
a- Where the Private Soldiers Lie at Bloemfontein.
b- The English Church Graveyard at Bloemfontein where the Officers and Nursing Sisters Lie.

23- Full Page showing the following Photographs with Descriptive text, for "The Reconstruction of Fleet Street.
a- Bolt Court.
b- Wine Office Court.
c- The Demolition of Fetter Lane.
d- The Clearance in front of St. Bride's Church.
e- The Temple Church Revealed by the Demolition Opposite Chancery Lane.

24- Full Page called "The Kinship of the Kings of Europe." Showing a Table of how the Ten Important Sovereigns of Europe are Descended from Mary Queen of Scots. Also the following Portrait photographs.
a- The Duke of Orleans.
b- The Duchess of Orleans.
c- Prince George of Saxony.
d- Prince Max of Saxony.
e- Prince Frederick Christian of Saxony.

26- The Weekly Article "Outlook on Foreign Affairs," Written by A. R. Ropes.