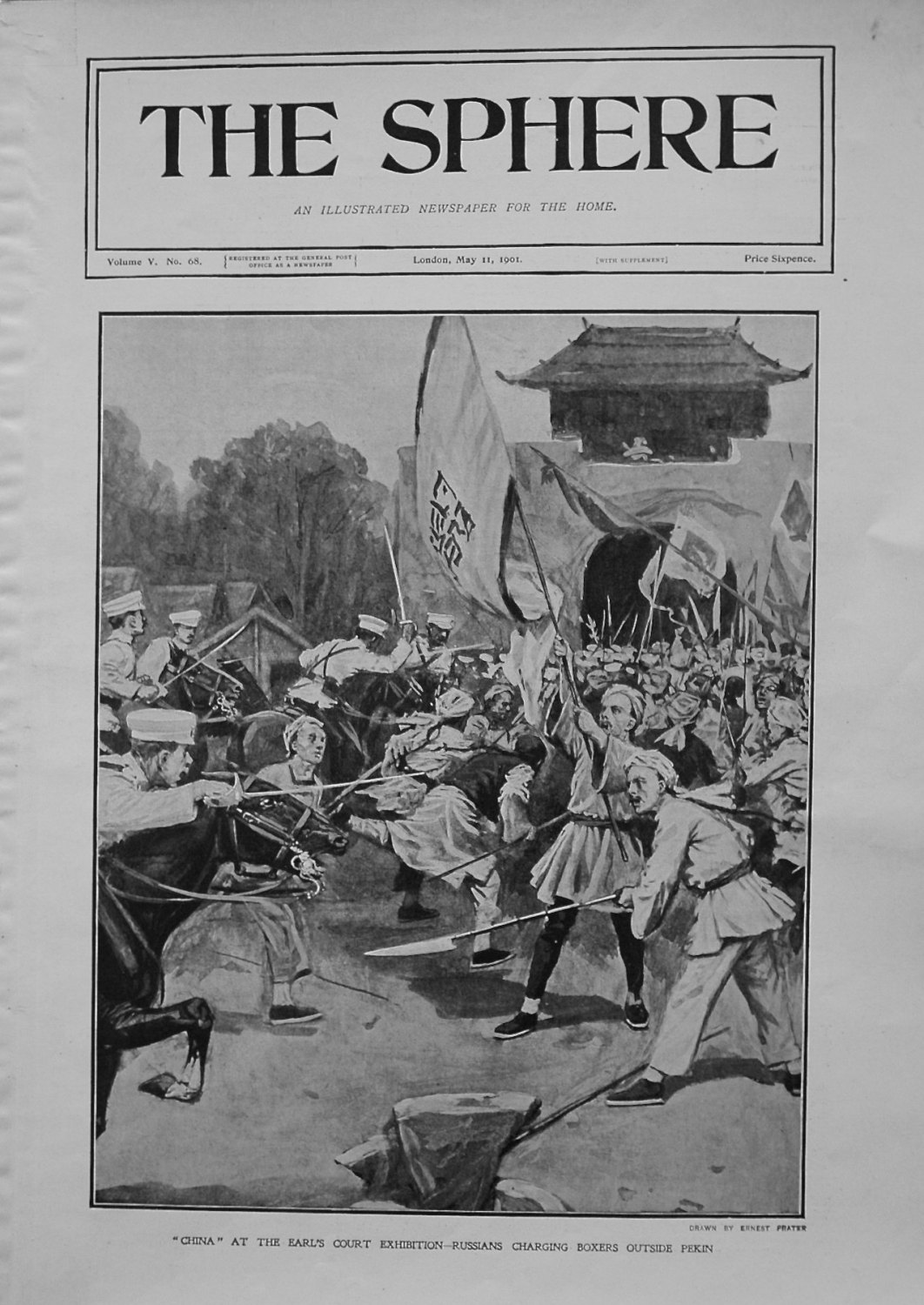 2- The Weekly Article "The Newsletter," showing London Week by Week. Showing the following Photographs.
a- The School for Wireless Telegraphy : The Famous old Line-of-Battleship called "Hector."
b- The Speaker's Late Bulldog, "Billy"
c- The "Daily Telegraph" Cup.
d- The May Queen at Whitelands College.
e- A Horse that Cost 10,000 Guineas, "Toddington"
f- The Winner of the 2,000 Guineas, "Handicapper"
g- 7,000 Guineas were refused for this Horse. "Duke of Westminster"
h- The Exhibition Addresss to the Duchess of Fife, by Lord Blytheswood.
i- Edinburgh's new Volunteers.
j- The Duchess of Fife opening the Glasgow Exhibition with a Golden Key.
k- M. Loubet at the Paris Salon.
l- Sir Thomas Lipton's Yacht "Shamrock II.," Under Sail.
m- The Bare Outlines of "Shamrock II."

3- Full page showing 2 Photographs from "The Imperial Tour to Australia" showing "Ceylon's Welcome to the Duke of Cornwall.
(Descriptive Text at bottom of Page).

5- Full Page Drawing by Sidney Paget showing "The Opening of the Glasgow Exhibition by the Duke and Duchess of Fife."
(Descriptive Text at bottom of Page).

6- Full Page called the "Inauguration of Australia's First Federal Parliament." Showing the following Photographs with Descriptive Text.
a- The Suggested Federal Flag for Australia.
b- Where the Duke of Cornwall is staying in Melbourne.
c- The Exhibition Buildings in which the first Federal Parliament was Inaugurated on May 9th.
d- Lady Hopetoun, the Duke and Duchess of Cornwall's Hostess during the Melbourne Visit.
e- The Two Sons of Lady Hopetoun, who is Entertaining the Duke and Duchess of Cornwall at Hopetoun.
f- The Melbourne Parliament House at which Receptions were held .

7- Full page showing a Drawing by A. Pearse, called "In The Tracks of H.M.S. "Ophir" showing a Concert on Board Ship.
(Descriptive Text at bottom of Page).

8- Full Page Article called "Life on the lines of Communication in South Africa." as Described by an Officer.

9- Full Page Drawing by Lancelot Speed for "The War in South Africa," showing "A Captured Kaffir who has been a Boer Spy."

10- Article called "The Task of Governing Cuba : The Methods of Spain and of America."

11- Full page showing a Drawing by Ernest Prater called "The Little War of our American Cousins," showing "A Difficult March in the Philippines."
(Descriptive Text at bottom of Page).

17- Full Page called "At the Royal Academy Exhibition" showing a Painting called "Good-Bye ! Off to Skibbereen" - By Stanhope Forbes, A.R.A.
(Descriptive Text at bottom of Page).

18- Story called "Clementina. Chapter VI. "Wogan Continues His Journey." Written by A. E. W. Mason, and Illustrated by Bernard Partridge.
(To be Continued).

20- The Weekly Article called "Amusements."  showing a Photograph of "A Scene from the Brilliant "Lion Hunters" at Terry's Theatre.

22- Full Page Drawing by Charles Wyllie called "The Thames as a Highway for Londoners," showing "Review of the Steamboat Fleet."
(Descriptive Text at bottom of Page).

23- Article called "The Portuguese Gateway to Rhodesia : The Port of Beira."

26- Half Page Advert for "Mappin Brothers."

30- The Weekly Article "Outlook on Foreign Affairs," by A. R. Ropes.