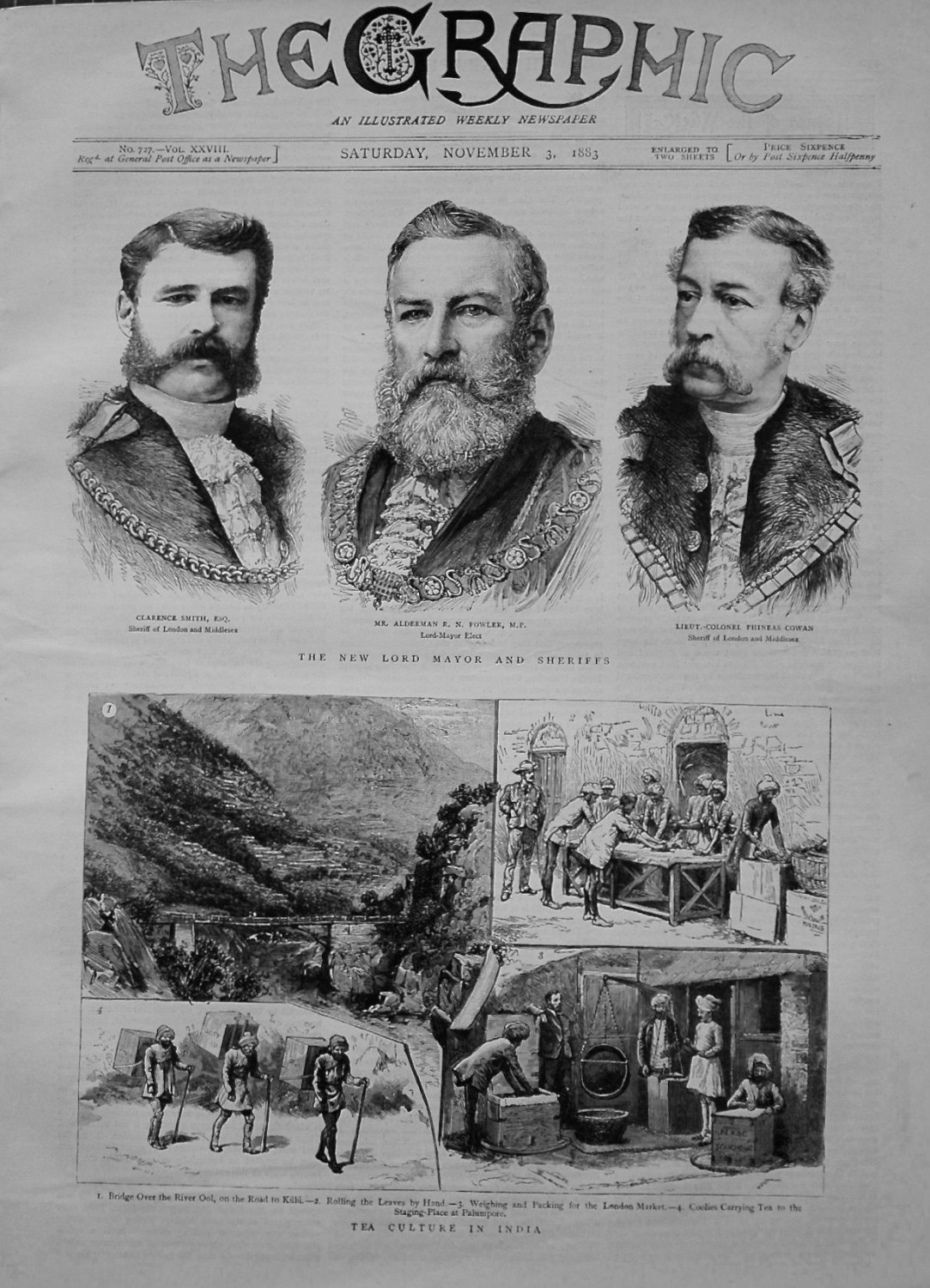 For Sale is an Issue of "The Graphic," November 3rd 1883. This issue contains 16 Pages, 32 Sides, and has been taken from a Bound Volume, therefore the Binding holes are showing.

Engravings.
1- The New Lord Mayor and Sheriffs. (Portraits).
a- Clarence Smith, Esq. - Sheriff of London and Middlesex.
b- Mr. Alderman R.N. Fowler, M.P. - Lord-Mayor Elect.
c- Lieut. -Colonel Phineas Cowan. - Sheriff of London and Middlesex.
2- Half Page of Engravings for "Tea Culture in India."
a- Bridge over the River Ool, on the Road to Kulu.
b- Rolling the Leaves by Hand.
c- Weighing and Packing for the London Market.
d- Coolies Carrying Tea to the Staging-place at Palumpore.
3- The Purchase of Rochester Castle by the Corporation of the Town.
a- The Mayor Reading the Purchase Deed.
b- Exterior of the Castle.
c- Rochester Castle and Cathedral from the River.
d- Interior of the Castle Keep.
e- The Procession Passing the Guildhall after the Dedication Ceremony.
4- The New Railway Bridge Across the Indus at Attock - Panoramic View of Attock and the Surrounding Country. (Half Page Landscape Engraving).
5- The First Railway in the Malay Peninsular : Sir Frederick A. Weld, K.C.M.G., Governor of the Straits Settlements, cutting the First Sod of the Salangore Railway. (Quarter Page Engraving).
6- The New Meteoro;ogical Observatory on the Summit of Ben Nevis, Scotland. (Quarter Page Engraving).
7- The Explosions on the Underground Railway. (Double Page of Engravings).
a- Explosion seen from Charing Cross Station - Sketched by an Eye-Witness.
b- Scene Outside Edgware Road Station immediately after the Explosion.
c- The Spot where the Explosion took place, between Praed Street and Edgware Road Stations.
d- Conducting the First Train from Charing Cross to Westminster after the Explosion.
e- Removing the Wounded to St. Mary's Hospital.
f- General View of the Place where the Explosion occurred, between Praed Street and Edgware Road Stations.
g- Examination by the Government Officials of the Place where the Explosion occurred between Charing Cross and Westminster.
h- The Wrecked Carriages - Sketched by Neasden Depot the Morning after the Explosion.
8- The Quarter Centenary of the Birth of Martin Luther. (Double Page of Engravings).
a- Portrait of Luther after Death.
b- Luther's Room in Castle Wartburg.
c- Luther, his Wife and Family.
d- Inner Court of Old Castle, Coburg.
e- Catherine Von Bora, Luther's Wife, from a Portrait by Lucas Cranach.
f- Portrait of Luther when in hiding as Junker Georg.
g- Luther's Drinking Cup, preserved in the Museum of Nuremburg.
h- Autograph of Luther, Dated 1542, in a German Bible printed at Wittemberg in 1541.
i- Luther's Lodgings in the Wartburg.
j- Portrait of the Emperor Charles V., After Titian.
k- Luther Preaching.
9- Full Page Engraving showing 4 Sketches for "Aquatic Sports at Amoy."
10- Half Page showing the following 3 Engravings for "The Recent Rioting at Canton."
a- Chinese Looting the Foreign Settlement.
b- The First House in the foreign Settlement Fired by the Chinese Mob.
c- Viceroy's Soldiers Encamped Round Shamien, the Foreign Settlement- A Picket on the Bund.
11- Half Page Engraving showing a "Scene in Act IV, of "Young Folks Ways," the new Play at the St. James's Theatre."
12- An Artist's Visit to the River Congo, III. - Fac-similes of Sketches made by Mr. H.H. Johnston, F.Z.S., during his Journey in Central Africa. (Small Engravings).
a- The Palava at Kinshasha - Meeting with Stanley after Return Voyage.
b- A Musical Instrument.
c- Bayansi Knives.
d- A Bayansi Chopper.
e- The Chief of Embe.
f- Makoko's Axe.
g- Mokemo - Upper Congo.
h- Upper Congo Village.
i- A Bateke Woman.
j- Bateke Chair.
k- Congo Fish - Protypterus.
l- Forest Scenery on Upper Congo.
m- Wooded Banks of Congo beyond Stanley Pool.
n- A Wabuma.
o- Ibaka- King of Bolobo.
p- Village near Bolobo.
q- A Fish caught in Upper Congo.
r- A Bayansi.
13- A Naval Officer's Afternoon at Malta. (Double Page showing the following 15 Engravings).

a- The Arduous Duties of Mr. Mild-Dew, R.N., being over, he Proceeds to Valetta.-b. The Steps of S. Giovanni are no joke.-c. Arrives Thirsty at the Club to find the Entry Barred by a Masherdonian Phalanx.-d. At last gets through, and discovers his Captain asleep over his Favourite Paper.-e. He Autograph's the Admiral's Book.-f. Also the Governor's.- g. Visit's the "Sick Man."-h. Looks up new Arrival staying at the Hotel Patronised by the Opera, and on the Balcony Converses under Difficulties.-i. He next calles on the American Prima Donna, and finds he is only one in a Crowd.-j. Piqued, he turns to the Consolation of Art, Brought to a sudden Termination by the Bayonet of the Sentry.-k. His unfinished Sketch.-l. In Disgust he makes for the Quay, and is Signalled.-m. Received at Custom House Landing by Crowd of Touting Boatmen.-n. Who are deeply hurt when he passes on, takes the Messboat.-o. And Returns on Board for Dinner as the Sunset Gun Fires from S. Angelo.

Condition is Good, With Foxing Spots in Places, mainly in the Margins. Spine strengthened with Filmoplast Tape.