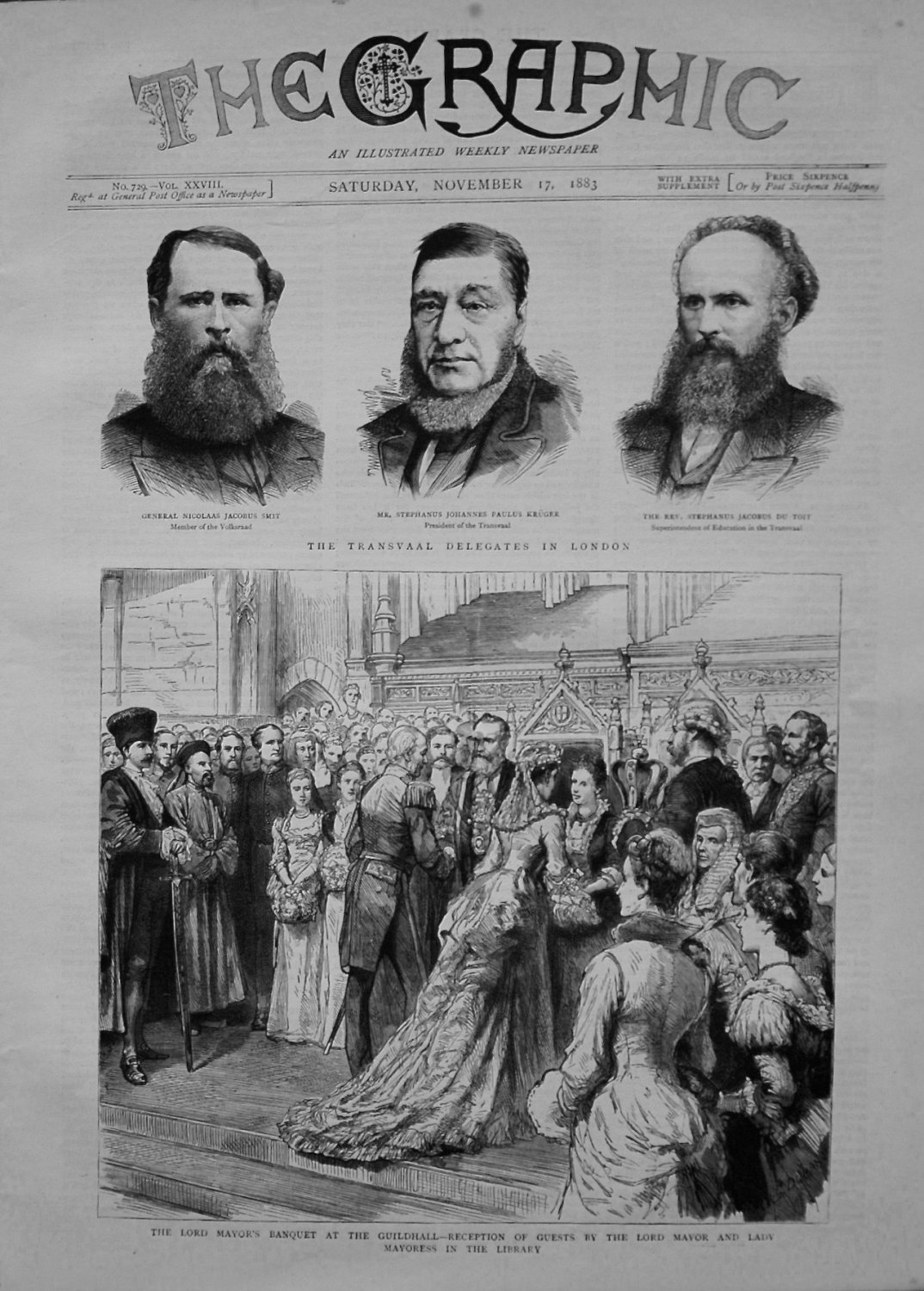 For Sale is an Issue of "The Graphic, November 17th 1883. This issue contains 12 Pages, 24 Sides, and has been taken from a Bound Volume, therefore the binding holes are showing.

Engravings.
1- Front Page shows the following 3 Portrait Engravings for "The Transvaal Delegates in London."
a- General Nicolaas Jacobus Smit - Member of the Volksraad.
b- Mr. Stephanus Johannes Paulus Kruger : President of the Transvaal.
c- The Rev. Stephanus Jacobus Du Toit : Superintendent of Education in the Transvaal.
Also on this Page is a Half Page Engraving for "The Lord Mayor's Banquet at the Guildhall-Reception of Guests by the Lord Mayor and Lady Mayoress in the Library." (Descriptive Text Inside).

2- Engraving showing "Rostra Lately Excavated in the Forum at Rome."

4- 2 Engravings showing "The New House of Assembly Capetown."
a- Exterior.
b- Interior.

5- Half Page showing the following 4 Engraved Sketches for "The Recent Disastrous Earthquake in Anatolia, Asia Minor."
a- Natives at Latzata Praying for Protection from the Earthquake.
b- A Group of Natives.
c- A Fisherman at Tchesme.
d- A Ruined House in a Village near Tchesme.

6- Half Page Engraving showing "The Guy Fawkes Celebrations at Bridgewater."

8- Half Page of Engravings showing the following 3 Sketches from "The Recent Siege of Muscat."
a- Muscat from the Harbour.
b- Fort of Es-Sirat-el-Gharbiyyah.
c- Fort Kalaat-el-Gharbiyyah.

10- Full page showing the following 2 Engravings for "The Rebellion in the Soudan." From Sketches by an Artist with Hicks Pasha's Soudan Field Force.
a- An Aristocratic Corner in a Kordofan Village.
b- Bashi-Bazouk Scouts Running in Arab Prisoners.


Condition is Very Good, with One or Two Light Foxing Spots in the Margins.