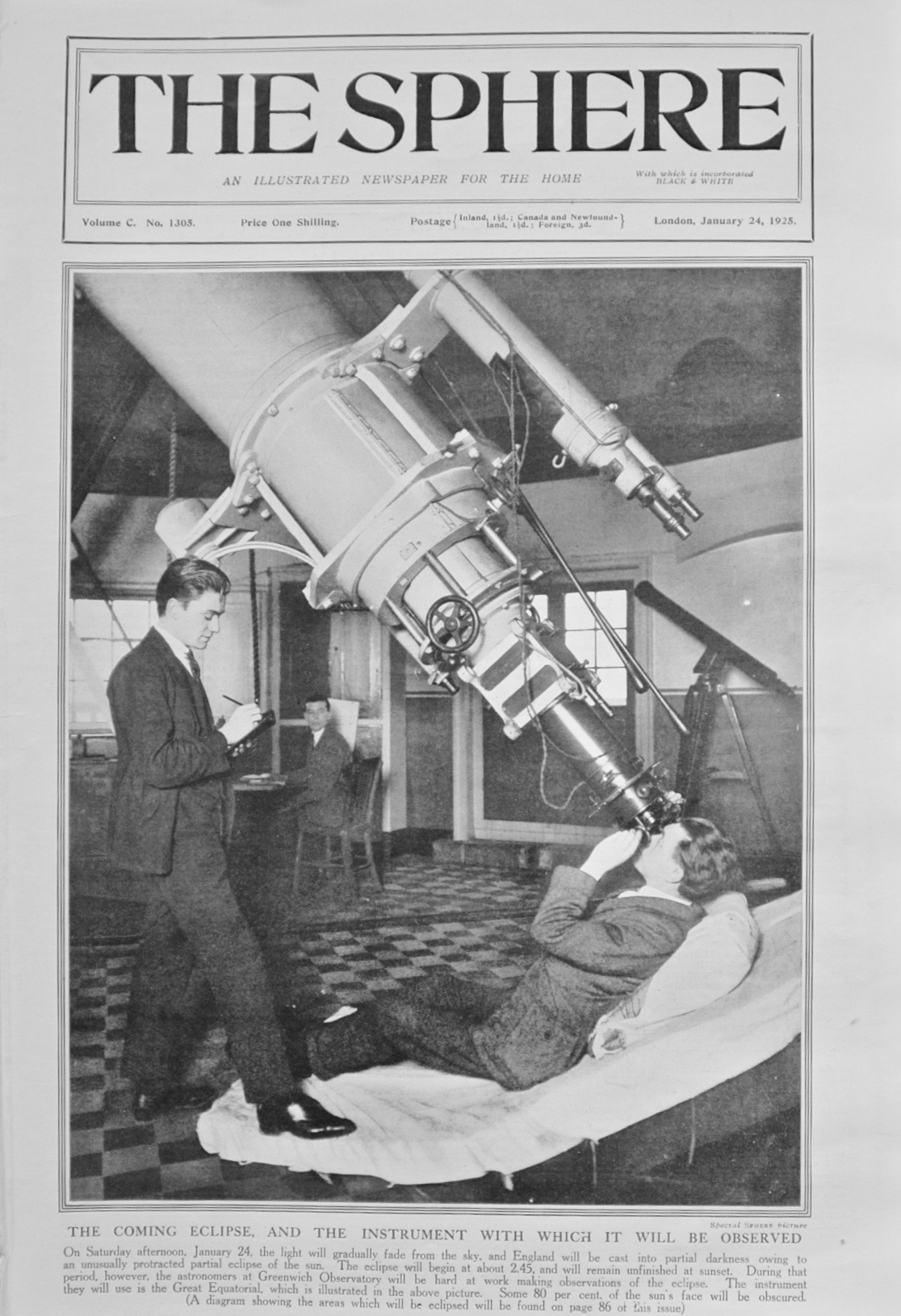 For sale is a copy of The Sphere, January 24, 1925.  This was removed from a disbound volume and has some repair to the spine where the binding was.  Overall condition is good.

Front page photo:  The Coming Eclipse, and the Instrument with which it will be observed at Greenwich Observatory.

3.  The Queen of Spain goes Hunting and other pictures.

4.  A Startling Discovery in a Bulgarian Village - Excavations of Kish - Lava Pools at Etna. (pictures and article)

5.  Picking up and Launching Aeroplanes from an Airship: The first Semi-rigid Airship to be built in America (pictures and article) - The Fruits of a Season's shooting in Nepal - A wreck off the Irish Coast.

6.  A Londoner on the Riviera by Alan Bott

7.  The "Highest" Ecclesiastic in the World - The Holy Lama of the Rongbuk. (pictures and article)

10.  Fashion for the Winter Sports Season - What Men and Women are wearing in Switzerland this year.  (pictures and article)

11.  The Danger to St. Paul's Cathedral - Pictures showing the interior construction of the Dome.

13.  Where Prince Charles was defeated : The King's Stables on the Culloden Battlefield - The Palais de Century (pictures and article)

14.  The capture of a Pure White Elephant in Burma - captured at Toungoo. (picture and article)

15.  One Hundred Years of Railway Travel - A Notable Centenary (pictures and article)

16.  A Winter Exhibition at Burlington House (pictures and article)

18.  The Problem of the Locust Swarm by Edward Step

19.  The Play's, The Thing by Herbert Farjeon

20.  A Success at the Criterion "Fata Morgana", the Hungarian play by Ernest Vajda (pictures and article)

22.  The Engraved Work of Walter Sickert (pictures and article)

25.  The Woman's Sphere by Marjorie

27.  The art of the Cinema by S R Littlewood