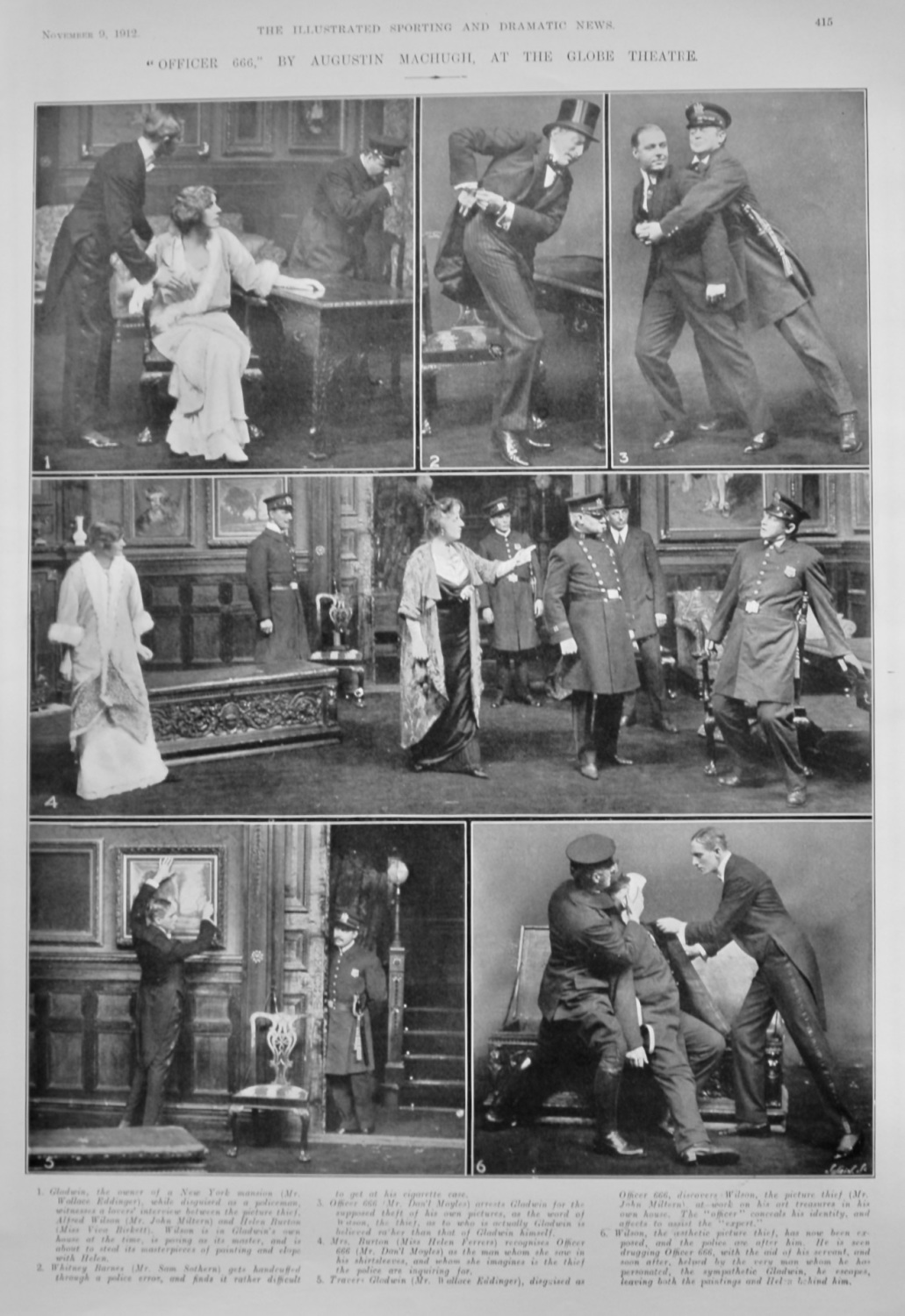 For Sale is a Full Page removed from "The Illustrated Sporting and Dramatic News, November 9th, 1912," showing the Following 6 photographs for "Officer 666," by Augustin Machugh, at the Globe Theatre."

a- Gladwin, the owner of a New York mansion (Mr. Wallace Eddinger), while disguised as a policeman, witnesses a lovers' interview between the picture thief, Alfred Wilson (Mr. John Miltern) and Helen Burton (Miss Viva Birkett).  Wilson is in Gladwin's own house at the time, is posing as its master, and is about to steal its masterpieces of painting and elope with Helen.
b- Whitney Barnes (Mr. Sam Sothern) gets handcuffed through a police error, and finds it rather difficult to get at his cigarette case.
c- Officer 666 (Mr. Dan'l Moyles) arrests Gladwin for the supposed theft of his own pictures, as the word of Wilson, the thief, as to who is actually Gladwin is believed rather than that of Gladwin himself.
d- Mrs. Burton (Miss Helen Ferrers) recognises Officer 666 (Mr. Dan'l Moyles) as the man whom she saw in his shirtsleeves, and whom she imagines is the thief the police are inquiring for.
e- Travers Gladwin (Mr. Wallace Eddinger), disguised as Officer 666, discovers Wilson, the picture thief (Mr. John Miltern), at work on his art treasures in his own house. The "Officer" conceals his identity, and affects to assist the "expert."
f- Wilson, the aesthetic picture thief, has now been exposed, and the police are after him.  He is seen dragging officer 666, with the aid of his servant, and soon after, helped by the very man whom he has personated, the sympathetic Gladwin, he escapes, leaving both the paintings and Helen behind him.

Reverse side shows the Following eleven Photographs from "The Sussex County Coursing Club Meeting at Bognor and Aldingbourne."