Yeomanry in Training : The Final Charge on the Boer Position in the Military Tournament at Hightown Camp. 1900. 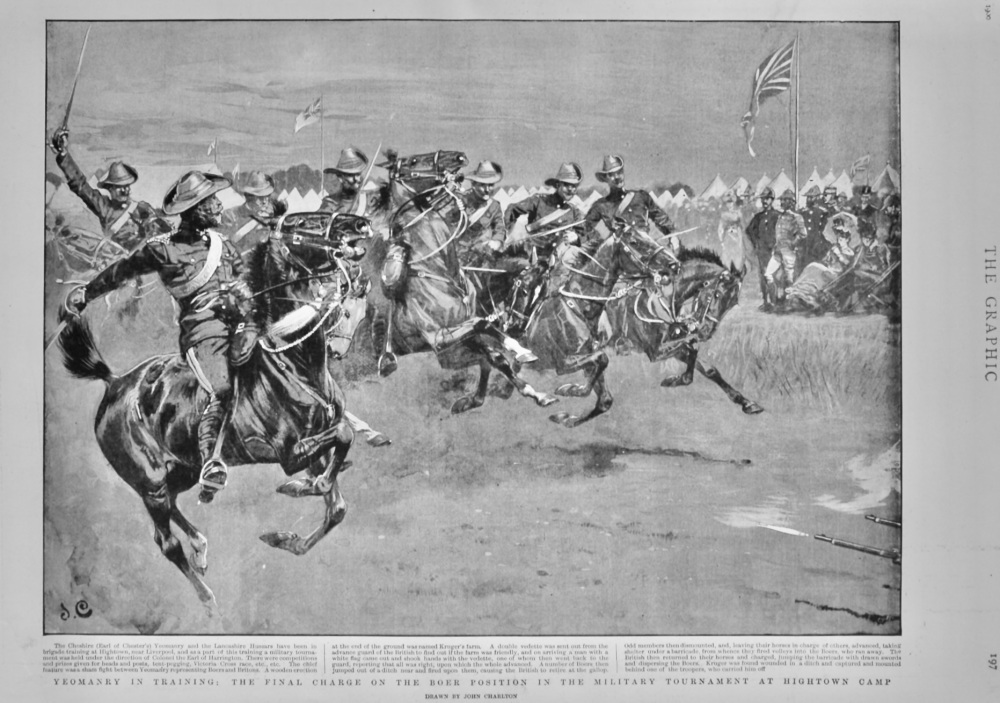 For Sale is a Full Page removed from "The Graphic, August 11th, 1900," showing a Drawing by John Charlton of "Yeomanry in Training :  The Final Charge on the Boer Position in the Military Tournament at Hightown Camp."

The Cheshire (Earl of Chester's) Yeomanry and the Lancashire Hussars have been in brigade training at Hightown, near Liverpool, and as part of this training a military tournament was held under the direction of Colonel the Earl of Harrington.  There were competitions and prizes given for heads and posts, tent-pegging, Victoria Cross race, etc., etc.  The chief feature was a sham fight between Yeomanry representing Boers and Britons.  A wooden erection at the end of the ground was named Kruger's farm.  A double vedette was sent out from the advance guard of the British to find out if the farm was friendly, and on arriving a man with a white flag came out and shook hands with the vedette, one of whom then went back to the guard, reporting that all was right, upon which the whole advanced.  A number of Boers then jumped out of a ditch near and fired upon them, causing the British to retire at the gallop.  Odd members then dismounted, and, leaving their horses in charge of others, advanced, taking shelter under a barricade, from whence they fired volleys into the Boers, who ran away.  The British then returned to their horses and charged, jumping the barricade with drawn swords and dispersing the Boers.  Kruger was found wounded in a ditch and captured and mounted behind one of the troopers, who carried him off.